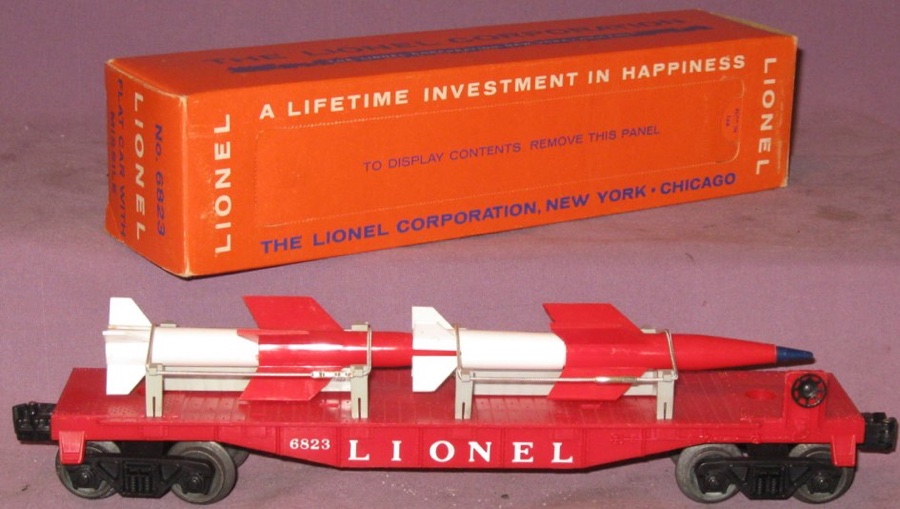 History
The 6823 Flatcar with IRBM Missiles is yet another example where Lionel engineers used existing parts from other products to create a new freight car. In the case of the 6823, Lionel used the basic flatcar produced by Lionel in the late 1950's and added two gray cradles (originally created for the 6801 Boat Car) as well as two simulated missiles. The missiles were new items for 1959 and used on several new items that year including the 470 Missile Launching Platform and the 6650 Missile Launcher.

The 6823 is a simple-looking freight car, but harder to find in complete and original condition than most collectors realize. Like most Space and Military themed items produced by Lionel, locating the flatcar is easy, but finding a complete freight car with original load is difficult. Additionally, the original box for the 6823 is very difficult to find in collector condition.

Features
Standard features of this car include: unpainted red flatcar with white lettering, a brakewheel stand and brakewheel, corner footsteps, AAR trucks with operating couplers, two gray cradles plus two missiles. An elastic band was used to secure each missile to the cradle.

Original missiles were always two colors; red and white. They were produced in both combinations, meaning either red over white or white over red..

Only Known Variation - Shown in the photo above - All 6823 freight cars are red with grey cradles and two-colored missiles.