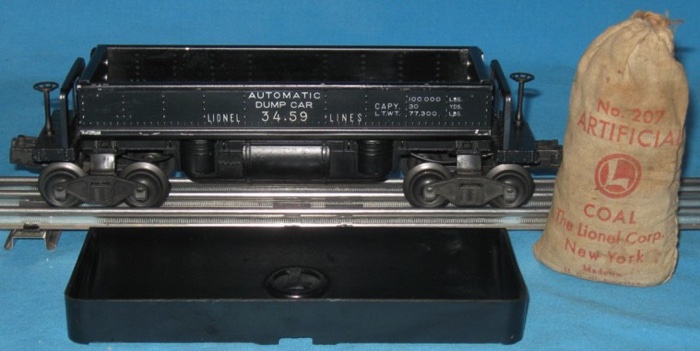 History
The 3459 was Lionel's first new-style coal dump car (also known as the automatic ore dump car) of the postwar era. It's modern appearance was in stark contrast to the primitive-looking 3559 which was a carry-over design from the prewar era. The 3459 was based on a prototype dump car of an eastern United States railroad.

The 3459 is a versatile freight car. It can operate with any of several Lionel coal-related accessories. It is not as common as the 3469 which was introduced in 1949. It is a sturdy and reliable operating car.

Features
Standard features of the 3459 include: two operating coil-type couplers on staple-end trucks, operating tray plus a brakewheel and platform at each end.

Production of the 3459 lasted for three years. During that time there were three color variations. The most common is a black painted tray. However, painted green and unpainted aluminum trays also exist.

Unpainted Aluminum with Blue Lettering - Extremely difficult to locate, a rare variation. Believed to have been produced only in 1946.