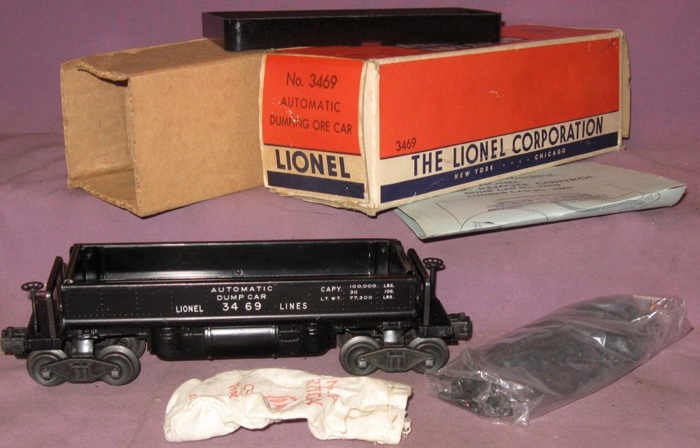 History
The 3469 Coal Dump Car (also known as the automatic ore dump car) is a continuation of it predecessor -- the 3459 operating coal dump car. The major difference is the coupler type -- now updated to reflect Lionel's new magnetic couplers. The 3459 and 3469 are based on a prototype dump car of an eastern United States railroad.

The 3469 is a versatile freight car. It can operate with any of Lionel's coal-related accessories such as: 97 Coal Elevator, 397 Coal Loader or the 497 Coaling Station. The 3469 is known for its sturdiness and reliability.

Features
Standard features of the 3469 include: two operating couplers, operating tray plus a brakewheel, brakestand and platform at each end. The car had staple-end trucks up to 1951 and bar-end trucks from 1952 on.

Although production of the 3469 lasted for 7 years, the only modification made was to the trucks. Otherwise there are no reported variations to the 3469.

Additional Detail, Photos & Box Information
There is a fairly difficult 3469 box variation to locate that is not well known -- an Early Classic box style. It is believed the Early Classic box was produced for a very short period of time in late 1948 or early 1949 just prior to the common Middle Classic production run for this box. Any Early Classic box will command a premium.