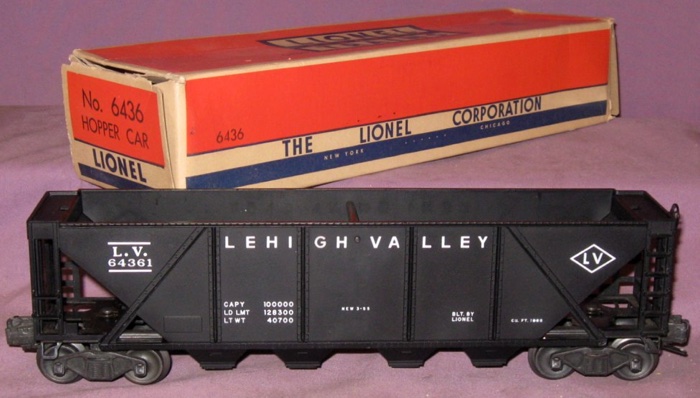 History
The 6436 Lehigh Valley hopper has the longest production period of any postwar Lionel quad hopper. It was introduced in 1955, only a year after the initial introduction of the quad hopper. Although it was unavailable between 1958 and 1962, it was re-introduced in 1963 and ran through the end of postwar production in 1969.

The 6436 hopper has three distinct production runs. Each production run created a slightly different variation. To help identify each, Lionel assigned a different suffix to the of the variations.

Collector interest in any of the common 6436 hoppers is minimal. However, there are some unusual and hard to find variations which collectors continue to pursue.

Features
Standard features include: dual operating couplers on bar-end trucks up to 1958 and AAR trucks thereafter, a single brakewheel and for most 6436 hopper, a spreader bar. The earlier versions are known to have come with and without spreader bar holes on the sides of the hopper. Versions without the spreader bar holes are harder to locate.

Black, 6436-1 - Shown in the photo above - A common hopper from the mid 1950s. It was painted black with white lettering and numbered carried the number '64361' on the sides. A few were manufactured without spreader bar holes and these are hard to find. This hopper was re-introduced in 1966 with AAR trucks and is hard to locate.
Maroon, 6436-25 - A maroon painted hopper from the mid to late 1950's. It's harder to find than the black hopper even though it remained in Lionels catalogue for one additional year. It is painted maroon with white lettering and numbered '643625' on sides. Similar to the black version, maroon hoppers occassionally surface without spreader bar holes. 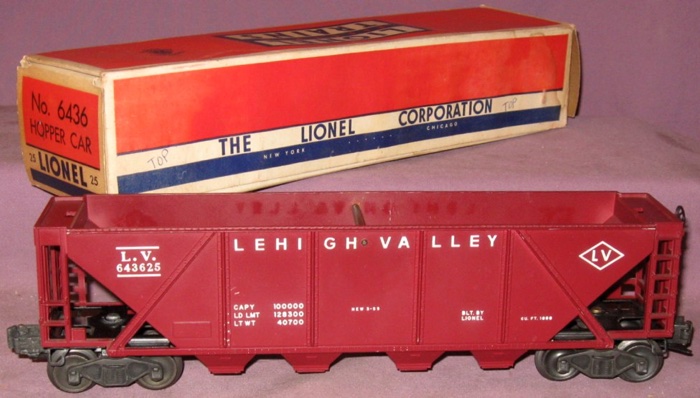 Lilac, 6436-500 - This lilac version was produced specifically for the Girls Set of 1957 and is a rare hopper to locate. It is painted lilac with purple lettering and numbered '643657' on sides. Similar to the black version, this hopper occassionally surface without spreader bar holes. 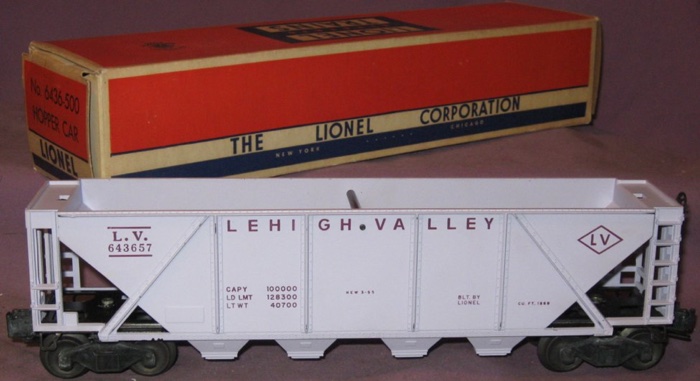 6436-110 Red - The most common version. It is a red unpainted hopper with white lettering. Unlike the previous versions, this hopper does not include the suffix on the side of the car. It only carries the numbers '6436'. The 6436-110 has the distinction of being the final quad hopper designed and catalogued by Lionel during the postwar era. It's introduction in 1963 as a separate sale item and inclusion in many sets during the 1960s has made this a common item to acquire. There is a hard to find version having the lettering 'New 3-55' centered on each side. 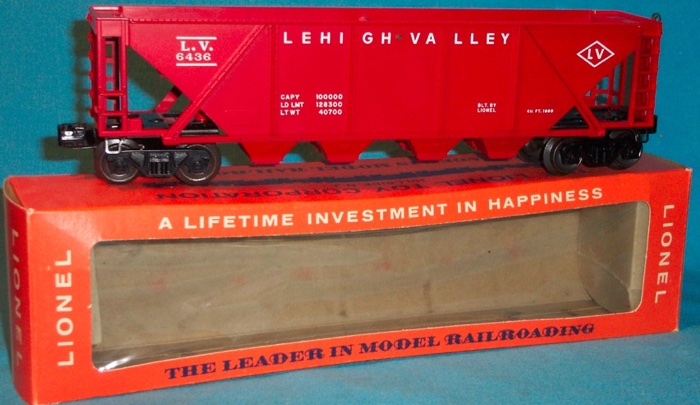