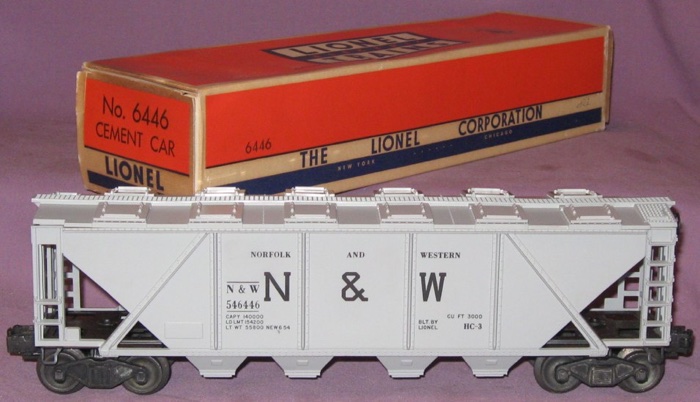 History
The 6446 Covered Quad hopper was introduced in 1954 wearing the N & W roadname and remained in the Lionel catalogue until 1957. During that time it did experience some minor changes. After 1957, it made a brief appearance in 1963, but this time with Lehigh Valley as the roadname of choice by Lionel. The Lehigh Valley version is rare and only lasted for one year.

The 6446 is not an easy item to find in collectable condition. At the same time, general interest in hoppers is minimal. Therefore, this is one of the few scenarios where a hard to find item can be purchased at a reasonable pice.

Features
The 6446 hopper experienced several variations during it production run. The following is an approximation of changes and features on a year-by-year basis:

Additional Detail, Photos & Box Information
The Orange Picture version of this box was only produced for one year -- 1963 -- and is a rare box.