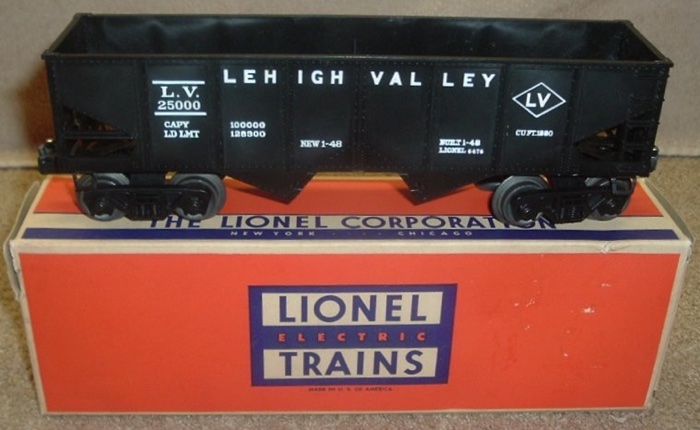 History
The 6476 was a continuation of the 6456 short hopper. The 6476 reflected several manufacturing changes, most of which permitted Lionel to reduce the production time and effort in making a short hopper. Unfortunately, most of these changes resulted in an inferior product when compared to the earlier 6456 hopper.

The 6476 was Lionel's most inexpensive hopper in the late 1950s and entire 1960s. Its evolution during the 12 catalogued years is not straight-forward. Determining accurate production information has proven difficult. The data on this page is generally accepted as accurate, but is certainly arguable. Collecting all variations of the 6476 is within the budget of most collectors as the vast majority of these hoppers are readily available at reasonable prices.

Features
Standard features of a 6476 hopper include: AAR trucks (except 1957 production which had bar-end trucks), two operating couplers and unpainted bodies with white lettering.

Additional Detail, Photos & Box Information
The length of this type of hopper is approximately 9 1/2" long (coupler to coupler).

6476 Coral Red or Pink with white lettering - This is the hardest 6476 hopper to locate. It was produced for only one year -- 1958 -- and is a rare variation. It is always equipped with two operating couplers on AAR trucks.

6476-135 Yellow with white lettering - This is an unusual variation because the car is actually numbered 6176! Lionel catalogued this car as a 6476 because it had two operating couplers. It was produced from 1964 until 1969.