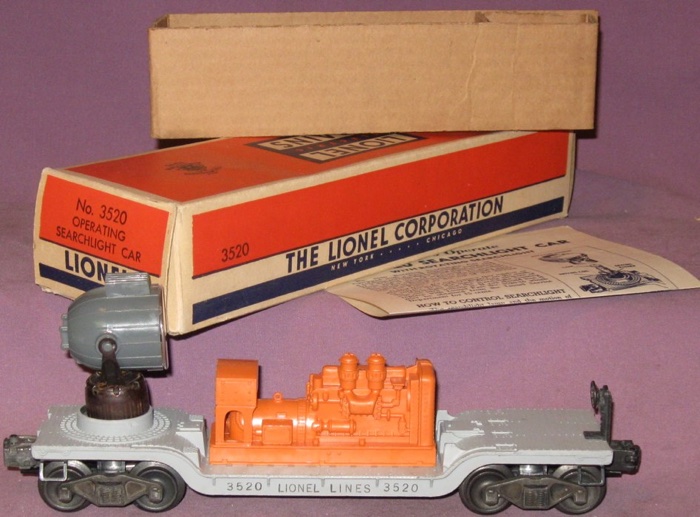 History
The 3520 Rotating Searchlight Car is similar to the earlier 6520 searchlight car. The newest feature on the 3520 is a remote-control operated on-off switch. This switch allows the operator to activate Lionel's 'Vibro-motor' which in turn begins rotating the searchlight lens.

The 3520 is a smooth running and reliable operating car. Due to its history of being a reliable performer and having a limited two year production run, this car is still in demand by both collectors and operators. Clean examples with original boxes are becoming harder to find.

Features
Standard features on the 3520 include: painted gray die-cast depressed-center frame with black lettering, vibration motor, metal footsteps at each corner, a remote-control on-off switch plus a simulated orange generator. A single brakewheel with brakestand is also included and mounted at the opposite end of the searchlight.

Variations pertaining to the 3520 all center around the searchlight housing bracket (the metal bracket holding the plastic searchlight lens). This bracket was produced in three variations:

Almost every 3520 came with bar-end trucks. However, some of the very earliest 1952 production cars might have included left-over staple-end trucks.