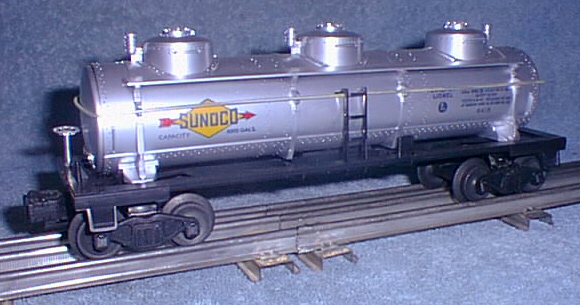 Features
Standard features of the 6415 include: painted silver tank, molded black plastic frame, metal handrails, two metal ladders, brakestand with brakewheel, two operating couplers plus a filler cap next to each dome. The lettering is either blue or black.

The 1953 thru 1955 model was equipped with metal bar-end trucks while the 1964 to 1969 model has plastic AAR trucks. In either case, it always had two operating couplers.

Additional Detail, Photos & Box Information
The filler caps are the most fragile portion of the tank car. It is quite common to find some -- or all -- of the filler caps broken off of the shell.

Additionally, there are several variations to the tank car -- none of which are considered hard-to-find. They include:

Technical Data - The following variations can be located pertaining to the technical data (data printed to the right of each side):

Sunoco Decal - The Sunoco decal is available with either '8000 Gallons' or '6600 Gallons' printed below the decal. The '8000 Gallon' version is believed to have been produced first.
Brakestand - The brakestand is either silver or black. The silver version was the first to be produced followed by the black version.