History
The 6465 tank car is a unique tank car in the Lionel family. It's fame comes from the fact it had the longest production run of any single-style Lionel tank car. Additionally, the 6465 contained the widest variety of roadnames used by Lionel on a single style tank car.

The 6465 was introduced by Lionel in 1948 as a Sunoco tank car. From there it carried numerous roadnames such as Gulf, Cities Services and Lionel Lines. Production of the last 6465 tank car was in 1966.

Due to its long 19-year production run, the 6465 tank cars have seen practically every variation of a two-dome tank car. Since the 6465 was included in many sets, locating a 6465 tank car is easy. However, collector quality versions of the late 1940's and early 1950's are the hardest to locate. Recently, the early to mid 1960's versions are becoming harder to find in nice condition.

Features
Listing standard features of the 6465 is impossible because of the nineteen years of production. The only consistent item for that period is the 6465 remainded a two dome tank car! The following features used to help identify the approximate year of production:

Additional Detail, Photos & Box Information
1958 is the year Lionel implemented the most significant amount of changes to the 6465 tank car. Most, if not all, were aimed at reducing Lionel's production cost.

Sunoco - Sunoco version shown in the photo above This is the most common 6465 tank car. It had the longest run of any 6465 tanker and is generally viewed as the highest quality 6465 tank car. With all metal trucks and wire handrailings, the Sunoco tank car is a great looking tank car. Production started in 1948 and ended in 1956.
Gulf / Lionel Lines - Probably the hardest 6465 tank car to locate in collectable condition. It was a one year only item from 1958 and is known to have come with either a black or gray body. Collector quality examples of either variation are difficult to locate. 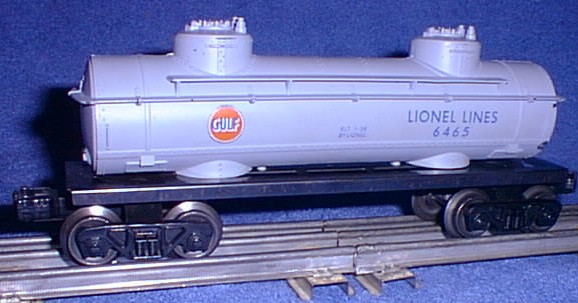 Lionel Lines - This roadname was produced in two different color variations -- black or orange. The black version is a one-year only item from 1959 and is somewhat hard to find. The orange version is a common tank car and produced from 1960 until 1966. Although the orange tank car is a common item, it is usually found in less than collectable condition -- those in collectable condition will warrant a slight premium in price.