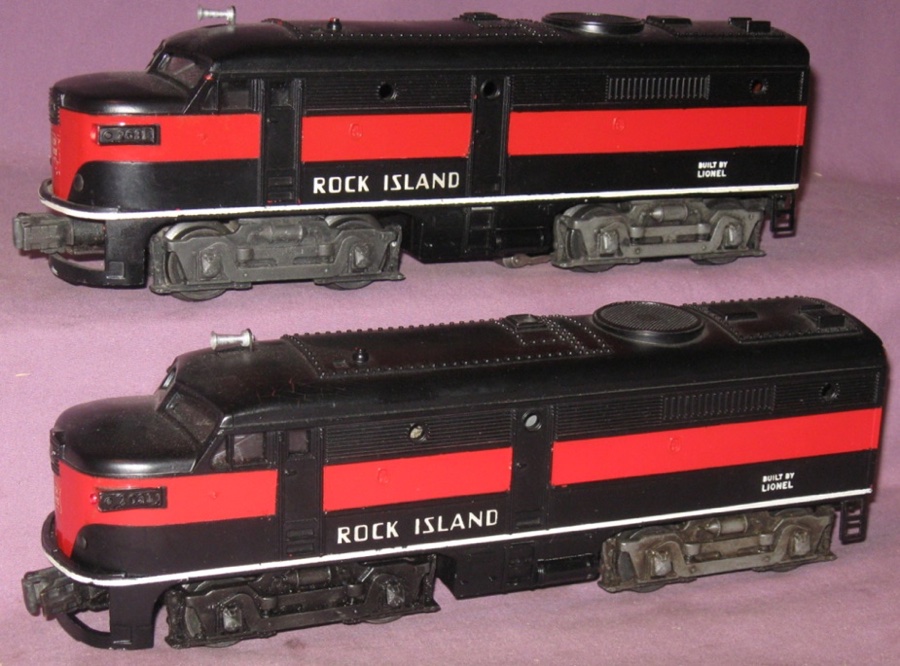 History
The 2031 Rock Island Alco AA units are part of the first series of Alco diesels produced by Lionel. Lionels first Alco series diesels -- those produced from 1950 until 1954 -- are high quality diesels with many desired features. All Alcos manufactured between 1950 and 1954 remain in demand today.

The 2031 Rock Island is one of the most attractive Alco diesels produced by Lionel. Its stark black body with an eye-catching red stripe on the side has been copied by many manufacturers since Lionels introduction in 1952. This diesel continues to be a favorite of collectors and operators.

Features
Standard features of the 2031 include: black painted body with a thick red and a thin white painted stripe on each side, white lettering, die-cast frame, two-axle Magnetraction, three-position E-unit, headlight in each unit, horn and operating front couplers on each unit with non-operating rear couplers. Other extras include a silver ornamental horn on each unit, headlight and winshield lens, rear metal step ladders plus illuminated number boards with the number 2031 printed in the lens.

Additional Detail, Photos & Box Information
The 2031 Rock Island is one of the few items ever produced in the postwar era where the stock number is not printed on the item. The only location where you can find the 2031 number is on the number boards. Additionally, the only box available for the Rock Island is its master carton -- individual boxes do not exist.

Flat Roof above Motor - Early production, assumed to be 1952. The flat roof versions are slightly harder to locate. Also, these versions have a tendancy to have their roof-line warp due to the heat of the motor.
Dime-Sized Raised Dimple on Roof - Shown in the photo above - For 1953 and 1954, Lionel added a slightly raised dimple -- approximately the size of a dime -- to the top of the shell, directly above the motor. The raised dimple significantly reduced the warpage problem commonly seen on the flat roof versions. The raised dimple roof were produced in 1953 and 1954.