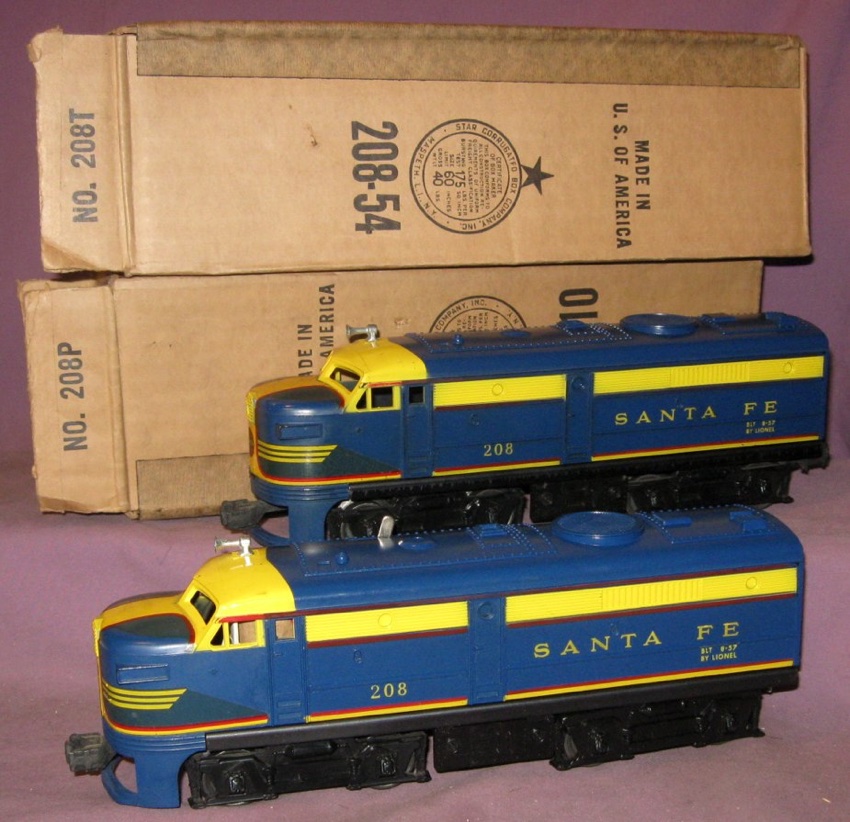 History
The 208 Santa Fe Alco AA diesels is unique in that it is one of only two postwar Lionel diesels to wear the Santa Fe's freight colors. Santa Fe's ever-popular red, yellow and silver war-bonnet paint scheme was reserved for passenger train hauling while the blue and yellow Santa Fe's were designated for freight train service.

The 208's were produced for two years and are very similar to the 204 Santa Fe AA diesels from 1957. In almost every case, the front decal is severely cracked or has deteriorated due to age. It is extremely difficult -- almost rare -- to locate a matched set of Santa Fe's with intact front decals.

The 208 Santa Fe is an excellent running locomotive. However, these later-style Alcos clearly lacked the quality, detail and durability of the Lionel Alco diesel produced in the early 1950s.

Features
The 208 Santa Fe included one powered unit and one non-powered unit. Standard features on each unit include: dark-blue painted body with a yellow strip, a wrap-around front decal plus front and rear die-cast non-operating couplers. The powered unit was also equipped with two-axle Magnetraction, three-position E-unit, functional horn plus an operating headlight.

Additional Detail, Photos & Box Information
The length of the 208 Alco units when coupled together is approximately 23" long (coupler to coupler).

Only Known Variation - All 208's are painted dark-blue with a yellow stripe and large decal on the front.