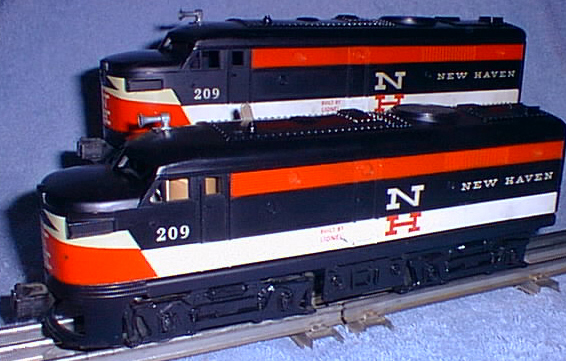 History
The 209 New Haven Alco AA diesel is arguably the hardest postwar Alco to locate. It was a one-year-only offering and was a mediocre sales item in 1958. However, as time has passed the realistic and attractive paint decorations on the New Haven Alcos has elevated this diesel into a highly desirable and sought-after postwar Alco.The 209 New Haven is an excellent running locomotive. However, these later-style Alcos clearly lacked the quality, detail and durability of the Lionel Alco diesel produced in the early 1950s.

Features
The 209 New Haven included one powered unit and one non-powered unit. Standard features on each unit include: orange, black and white painted bodies, a large wrap-around orange and white nose emblem plus front and rear die-cast non-operating couplers. The powered unit is equipped with two-axle Magnetraction, three-position E-unit, functional horn plus a headlight.

Additional Detail, Photos & Box Information
The length of the 209 Alco units when coupled together is approximately 23" long (coupler to coupler).

Only Known Variation - All 209's are painted orange, black and white and have a large wraparound nose decal on the front.