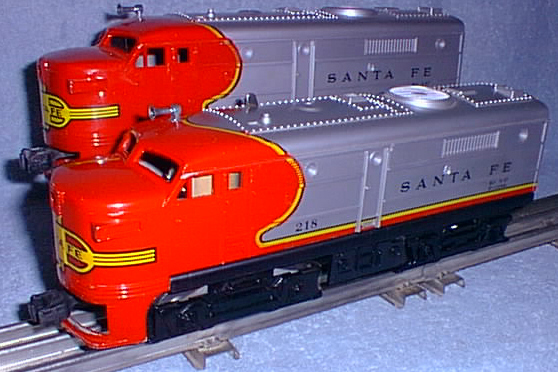 History
The 218 Santa Fe Alco was a common diesel in the Lionel Alco series in the early 1960s. Their five-year production run makes it an easy item to acquire. The 218s were usually produced as an AA unit -- except in 1961 when an AB combination was available in limited quantities.

Features
The 218 Santa Fe included one powered unit and one non-powered unit. Standard features on each unit include: silver and red painted body with black lettering plus front and rear non-operating couplers. The powered unit was also equipped with two-axle Magnetraction, three-position E-unit plus a functional horn and headlight.

Additional Detail, Photos & Box Information
The 218 AB units are much harder to locate than the common AA diesels. Additionally, most 218s were included in sets as unboxed component items. Locating an original box for a 218 -- or even its master carton -- is extremely difficult.

The length of the 218 Alco units when coupled together is approximately 23" long (coupler to coupler).

AA Diesel Units - Shown in the photo above - Available in each year from 1959 through 1963. All were painted silver and red with black lettering.
AB Diesel Units - Available in limited quantities in 1961 and assumed to be only available as a set component -- never as a separate sale item. Although not rare, the AB combination is certainly harder to locate than the AA units.