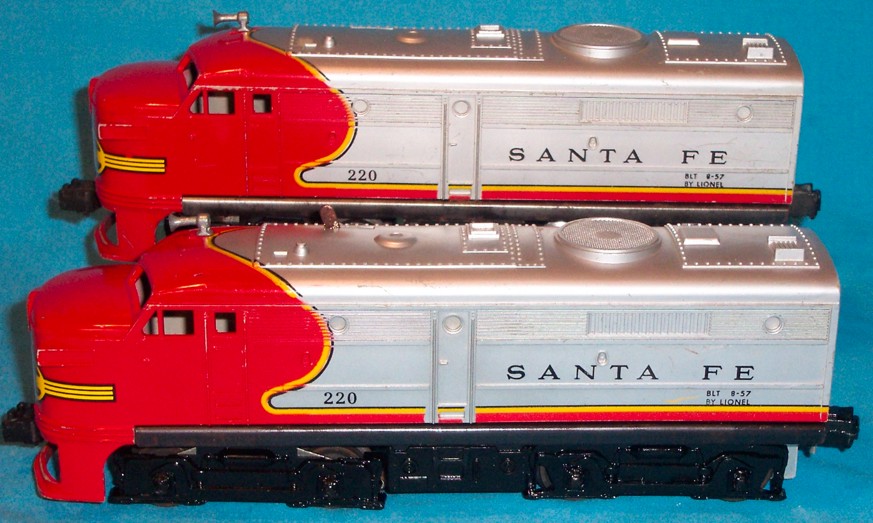 History
The 220 Santa Fe Alco diesel had a very brief production run during the early 1960's. Although this diesel is not included in the 1960 consumer catalogue, it is believed to have been available in a limited number of uncatalogued sets for this year. For 1961, the 220 did appear in the Lionel catalogue. Due to it's brief production cycle, the 220 is a fairly hard diesel to locate.

The 220 Santa Fe is a slightly scaled-down version of Lionel's 218 Santa Fe diesel. The main difference being the 220 does not have a functional horn -- which is included in the 218 diesel. Many operators will purchase a 218C 'B' unit for these diesels, thus creating an impressive ABA diesel set.

Features
The 220 Santa Fe included one powered unit and one non-powered unit. Standard features on each unit include: silver and red painted body with black lettering plus front and rear non-operating couplers. The powered unit was also equipped with two-axle Magnetraction, three-position E-unit plus an illuminated headlight.

Additional Detail, Photos & Box Information
The 220 Santa Fe diesel is believed to have been included as a single A unit in some uncatalogued sets or as an AA diesel when sold as a separate sale item.

The length of the 220 Alco units when coupled together is approximately 23" long (coupler to coupler).

AA Diesel Units - Shown in the photo above - Experienced collectors believe the AA combination was only produced in 1961. All were painted silver and red with black lettering.
Single A Diesel Units - When included in some uncatalogued sets, the 220 was sold as a single A unit diesel.