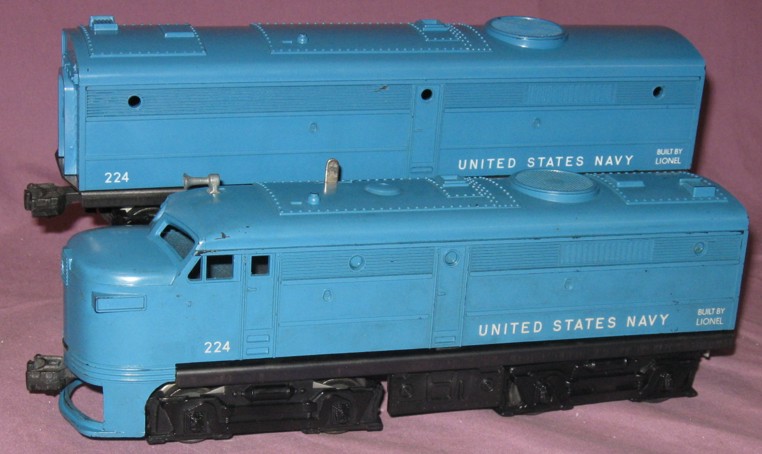 History
The 224 United States Navy Alco AB diesel is a one-year-only offering from 1960. This locomotive was only included in one postwar set -- set 1633 -- but was also available by itself. Low sales limited this diesel to only a single year of production and has subsequently become a difficult diesel to locate -- especially in collector condition. Original boxes for this locomotive set are scarce.

It is interesting to note most Alco diesel sets were manufactured and sold as AA sets. This is one of only a few AB diesel combinations produced by Lionel during the postwar era.

The 224 United States Navy diesel is an excellent running locomotive. However, the later-style Alcos clearly lacked the quality, detail and durability of the Lionel Alco diesel produced in the early 1950s. Finally, as with most of the later Alco series diesels, the front apron is usually the weak point and are frequently found cracked or completely missing. Any later series Alco diesel with intact front aprons are difficult to locate.

Features
The 224 US Navy included one powered A unit and one non-powered B unit. Standard features on each unit include: painted blue body with white lettering and front and rear die-cast non-operating couplers.

The powered unit is also equipped with two-axle Magnetraction, three-position E-unit, headlight plus a simulated horn on top of the cab.

Additional Detail, Photos & Box Information
The length of the 224 Alco units when coupled together is approximately 23" long (coupler to coupler).

Only Known Variation - All 224's have painted blue shells with white numbers and lettering.