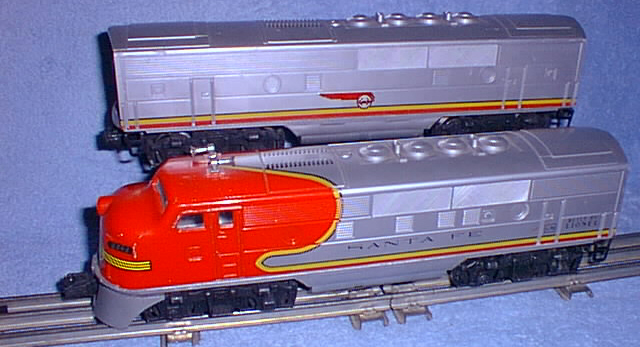 The 2243 was always sold as an AB combination. It is also one of a select few postwar Lionel F3's with only a single motor. Nevertheless, even with a single motor and Magnetraction, it is a powerful locomotive. The 2243 is noteworthy as being the only Lionel diesel to be catalogued both as an 027 gauge item (1955 and 1956) and later as an O gauge item (1957) -- without any internal or external changes!

Standard features of the non-powered B unit include: red and yellow painted areas over a silver shell, front and rear non-operating couplers, plus metal ladder steps at each corner. Note that the 2243 A and B units were only available with closed portholes.

Raised Ladder Steps on Cab - For the early part of 1955, each side of the cab had a raised ladder step below the cab door. Unfortunately, the paint on the steps had a tendancy to easily wear off. This version - especially with fully painted steps -- is much harder to locate than the later production version.
Flat Ladder Steps on Cab - Shown in the photo above - For the remainder of the 1955 production cycle and continuing through 1957, the Santa Fe was produced with flush molded cab steps. The flush molded steps easily held the paint and the steps are usually in better condition when compared to the earlier versions.