History
The 2343 Santa Fe F3 B unit of the early and mid-1950s was produced to be used with either the 2343 or 2353 Santa Fe F3 AA diesels. When a 2343C is coupled between a pair of AA diesels, the end result is an impressive-looking ABA unit. The ABA lash-up was both prototypical and a common sight on US railroads during the 1950s and 1960s.

Externally, the 2343C followed the same manufacturing change as the 2343 and 2353. From 1950 thru 1952, the 2343C had wire-cloth roof ventilators -- exactly as those found on the the 2343 F3 AA diesels. For its final three years of production (1953 through 1955), the 2343C had plastic ventilators molded into the body -- just as the 2353 diesel was manufactured. Therefore, if you are looking to match a Santa Fe B unit to an AA diesel combination, there is an early and late version of the 2343C. To this day it remains a mystery as to why Lionel changed the number of the AA unit regarding the ventilator change but not the number of the B unit!

Features
Standard features of the B unit includes: a silver painted shell with red, yellow and black strips running along the lower portion of each side, non-functional front and rear die-cast couplers, metal ladder steps on each truck plus roof ventilators. Each side also has two open portholes with clear -- often yellowed -- plastic lens.

One interesting item to note about the B unit is the lack of a printed roadname on the sides. The B unit carries the famous Indian Head Santa Fe logo on each side, but the actual Santa Fe name does not appear on this diesel. 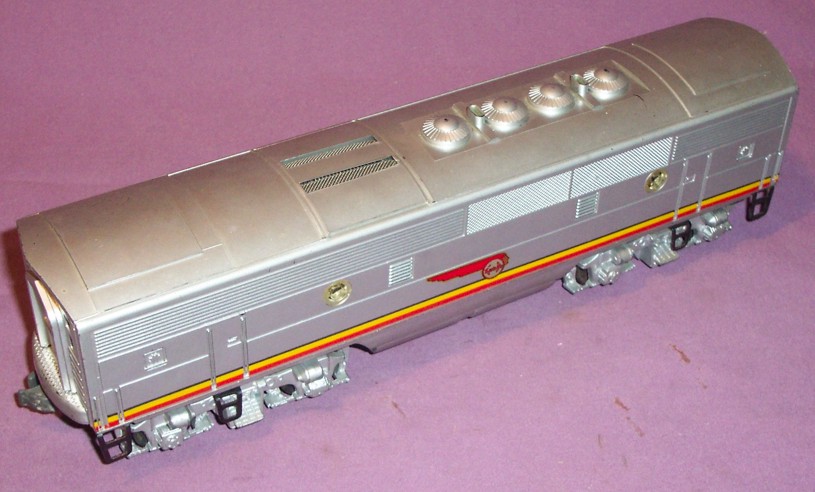