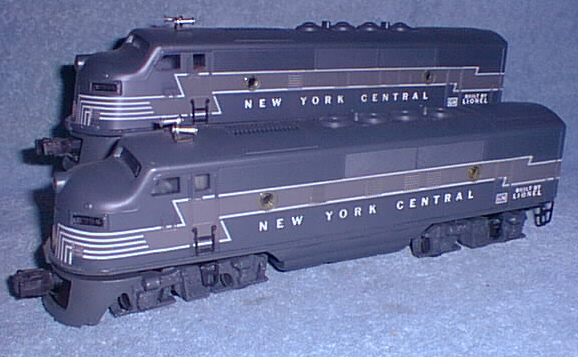 History
The 2354 New York Central F3 AA unit was the third -- and final -- NYC F3 produced by Lionel in the postwar era. Besides being one of the smoothest running postwar F3's, it's also the hardest NYC F3 to locate. Minor external and internal production updates accounted for the change of number from the prior NYC F3 -- the 2344.

Collectors and operators pursue this diesel because of its proven reliability and durability. The dual motors with Magnetraction makes for transporting long freight trains around a layout an easy task.

Unique features of each A unit are:

Additional Detail, Photos & Box Information
The 2354 shell has only one distingushing feature which helps identify 1953 production from 1954 and 1955. Beginning in 1954 -- and continuing throughout the remainder of all postwar F3 production -- there is a small 3/8" raised dimple immediately behind the ventilators in the middle of the roof. If the dimple is present on a 2354 then it was manufactured in 1954 or 1955. If the dimple is not present, then it was produced in 1953.