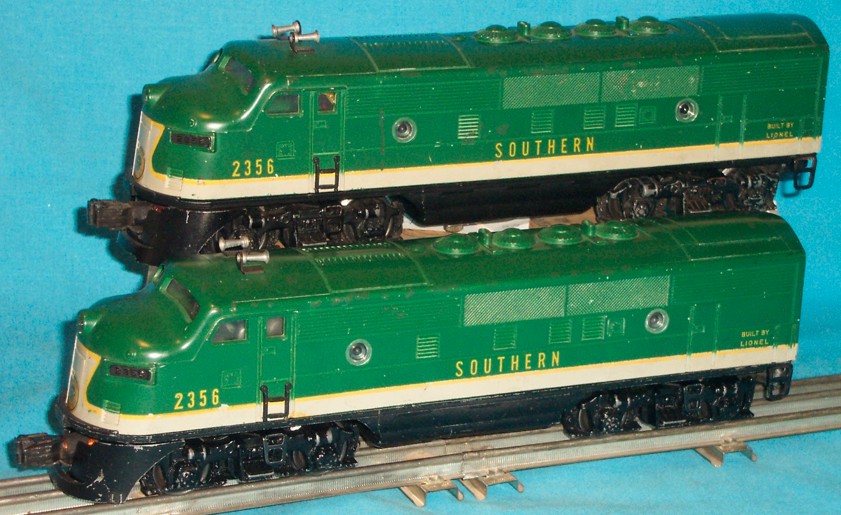 History
Beside the 2373 Canadian Pacific F3's, the 2356 Southern is probably second most difficult postwar F3's to locate. Even today, it remains a highly desirable item today. Except for the somewhat common Santa Fe and New York Central roadnames, the Southerns were the only roadname offered in an ABA combination during the postwar era.

As with all dual-motored postwar F3s, the Southern diesels are another set of high quality F3 diesels produced by Lionel. Although they lack some of the detailed exterior features of the earlier F3s, their durability was still top-of-the-line. As with most of the diesels from that era, when properly maintained, they will run as strong today as the day they were produced.

Features
Standard features of the powered A unit include: green painted body with gray painted lower quarter section running up through the nose, a thin yellow strip running along the side, yellow lettering, Southern decal on the nose, dual horizontal motors, Magnetraction, 3-position E-unit, operating front coupler with a non-operating rear coupler, illuminated headlight and number boards, two metal ladder steps on the rear plus dual ornamental horns. The frame and trucks were always black and the shell always had clear lens in the portholes.

Standard features of the non-powered B unit include: green painted body with gray painted lower quarter section running up through the noew, a thin yellow strip running along the sides, yellow lettering, Southern decal on the nose, functional horn, operating front coupler with a non-operating rear coupler, plus metal ladder steps at each corner. The frame and trucks were always black and the shell had clear lens in the portholes.

Additional Detail, Photos & Box Information
The 2356 shell has one distingushing feature which helps identify very early 1954 production from mid 1954 thru 1956. In early or mid 1954 -- and continuing through 1956 -- there is a small 3/8" raised dimple immediately behind the ventilators in the middle of the roof. If the dimple is present on a Southern F3 then it is the common variation. Southerns without the roof dimple are rare and indicate the manufacture date was early 1954 -- and probably only lasted a few weeks or month or two.