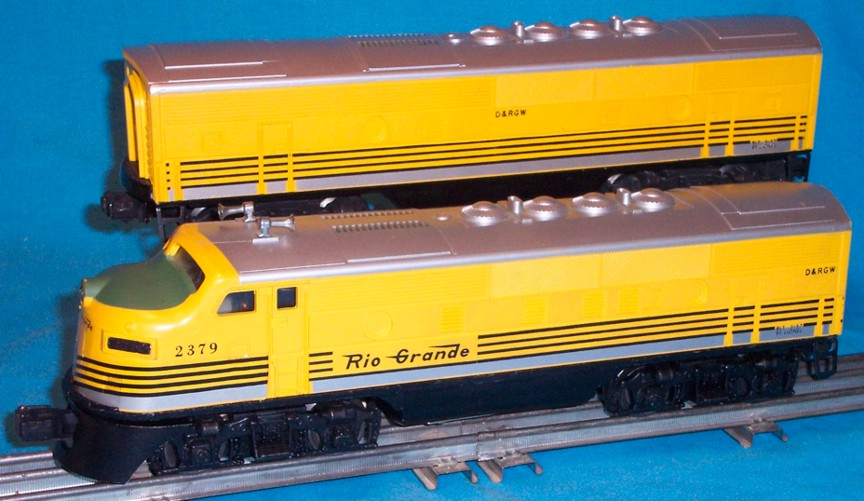 History
The 2379 Rio Grande F3 AB units of the later 1950s are yet another set of high quality F3 diesels produced by Lionel. Although the 2379 Rio Grande lacked some of the detailed exterior features of the earlier F3s, their durability was still top-of-the-line. As with most of the diesels from that era, when properly maintained, they will run as strong today as the day they were produced.

The 2379 was always sold as an AB combination. With its attractive and colorful Rio Grande paint scheme, the 2379 has become a sought-after diesel. The front decals and striping are usually found in less than collector quality condition and clean examples of the 2379 are difficult to locate. The 2379 was at the front of two freight sets -- one in 1957 and a second in 1958. It was also available as a separate sale item in each year.

Standard features of the non-powered B unit include: silver painted areas over a yellow shell, black lettering, operating front coupler with a non-operating rear coupler, plus metal ladder steps at each corner. Note that the 2379 was only available with louvered roofs and closed portholes.

Additional Detail, Photos & Box Information
When coupled together as an AB unit, the length of these F3s is approximately 26" long (coupler to coupler). The 2379 is one of a few diesels to have a matching postwar caboose -- the 6657 Rio Grande SP-style caboose.

Only Known Variation - All 2379s have silver tops and yellow sides with the nose of the A unit painted green.