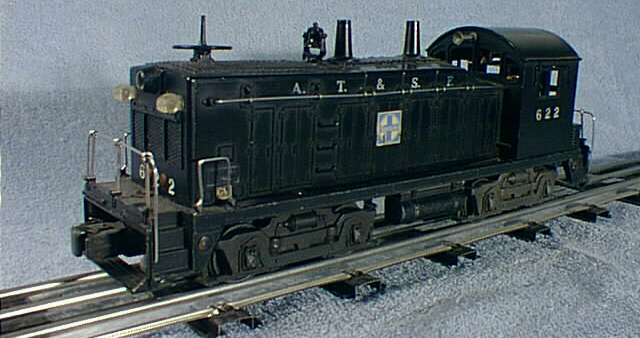 History
The 622 A.T. & S.F. NW2 diesel switcher was one of the first switchers produced by Lionel. It is a reliable diesel with excellent quality and attention to detail. Even in today's marketplace, it's a desirable diesel.

The 622 is one of two bell ringing switchers produced by Lionel -- the other being the 6220, an 027 version of the 622 switcher. Lionel had installed a small bell inside the diesel. As the train travelled along the track, the bell produced a continious and frequent 'ding'. Although this was a novel concept, many owner elected to disconnect the bell as it became a nuance after a few minutes of use. Many units found today have some or all of the bell missing or disconnected.

Additional Detail, Photos & Box Information
'622' on Front - Shown in the photo above - The earliest production runs from 1949 had the number '622' printed on the front, below the simulated radiator. This was soon eliminated and these early versions with the print number are hard to find.
'GM' decal - The GM decal is located on the side of the long hood near the front. This is know to have been produced in both a small and larger version -- althought there is no difference in value.