History
The 2360 Pennsylvania Electric was the final GG1 produced during the postwar era. This prototypical engine continues to be a desirable item for collectors and operators. Its sheer weight and impressive size speaks volumes regarding the quality and workmanship built into the locomotive by Lionel. To this day, a postwar GG1 remains in a class by itself.

The GG1's 4-6-6-4 wheel arrangement, dual pantographs and overall symmetry makes it an easily-recognized piece of railroading and model railroading history. Although you'll occasionally hear it referred to as an ugly duckling, most enthusiasts believe every collection must have at least one GG1 in order to appreciate its beauty and history.

For those model railroaders enthusiastic enough to install overhead wiring on a layout, all GG1's were built to use power from either Lionel's center rail or from its functional pantographs. In either case, the 2360 is a phenomenal running diesel.

Features
Standard features of the 2360 GG1 include: sheet-metal frame, die-cast body, two functional pantographs, three-position E-unit, dual motors with Magnetraction, headlight at each end, operating horn and dual operating couplers. Also included on the shell are an ornamental horn at each end, side decals and end decals with the number 2360 imprinted in the end decal.

There were two independent production runs of the 2360 -- each one lasting three years. During the six-year production span, several variations were produced. Listed below are some of the more significant changes:

Additional Detail, Photos & Box Information
There are numerous variations of the 2360, below is a summary:

Body Color - Shown in the photo above - The most common color is tuscan, however it was also available in dark brunswick green.
Side Stripes - Generally found with a large single side stripe, but was also produced with five thin stripes.
Side Ventilators - Can be found with either the gradually decreasing or same-sized ventilators. 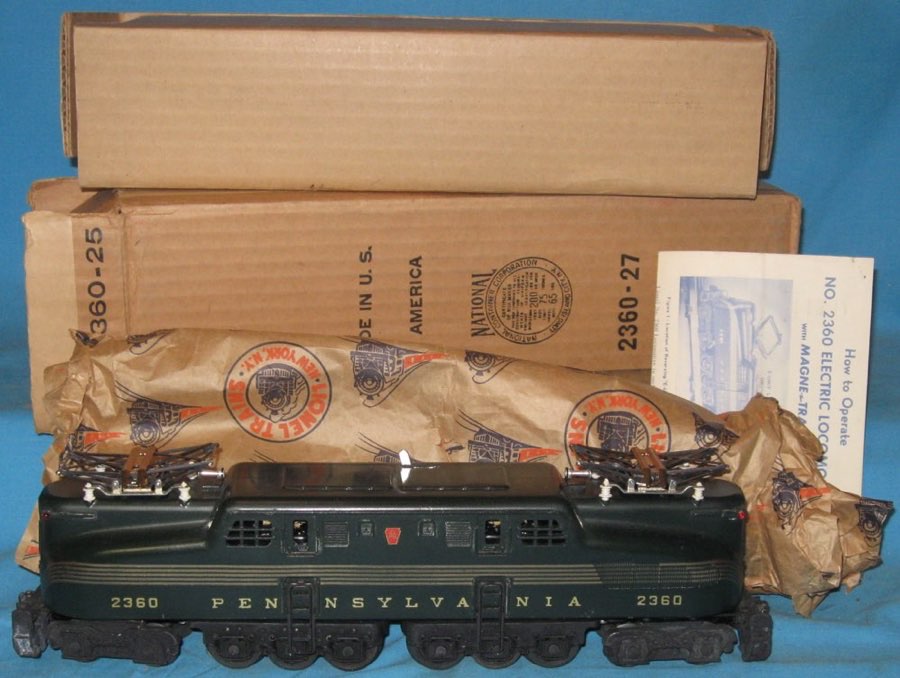