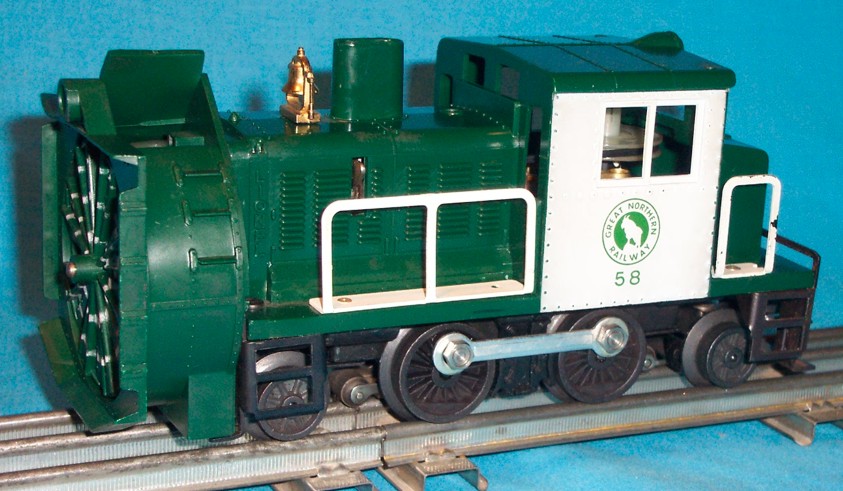 History
The 58 Great Northern Rotary Snowplow Switcher was produced for three years. These small locomotives -- generally referred to as Motorized Units -- are loosely design after a real-life gas Vulcan switcher of the 1950s. Lionel's model, similar to the real-life version, was small and had limited pulling power. On average, it could only pull two or three freight cars. Lionel only offered the 58 as a separate sale item and never in a set.

With the introduction of the 53 Rio Grande Snowplow in 1957, Lionel expanded it's snowbased-theme of railroading two years later with the creation of an all new type of snowplow -- the rotary snowplow. This rotary snowplow used an innovative design of rotating the front snowplow via a band attached to the top of the motor's armature.

Both the 53 Rio Grande and 58 Great Northern snowplows are unique in that their front coupler was replaced by a snowplow. Lionel's concept of slightly modifying an existing product to create a newer product was frequently done during the postwar era. These modifications permitted Lionel to create new products with minimal investment. More importantly, these small modifications made their product line look fresh, new and different from year to year.

The 58 rotary snowplow ran unchanged for three year and did not include magne-traction nor interior illumination.

Only Known Variation - Shown in the photo above. - All Great Northern snowplows are green with a white painted cab section. In general, the 58 snowplow is a difficult item to locate in collector condition. It had below average sales and is hard to find in today's market.