History
The 746 was the final, all-new, premium steam locomotive introduced by Lionel during the postwar era. It is a remarkable steamer -- loaded with features -- as well as an accurate representation of a real-life class J 4-8-4 Northern steam locomotive. In an era when dieselization was becoming king of the railroads, Lionel made a very bold decision to introduce an all-new, premium steamer!

Collectors frequently refer to the 746 Norfolk & Western as a "J" -- short for class J Northern. The 746 was catalogued with several Super O sets during its four-year production run. Except for the hard-to-find 773 Hudson, many individuals still consider the 746 as Lionels most sought-after steam locomotive from the postwar era.

Features
The 746 Northern has the following standard features: black painted die-cast boiler, red stripe on the running boards which is outlined in yellow, yellow number, full compliment of driving hardware, Magnetraction, three-position E-unit, liquid smoke, a functional headlight plus a wire handrailing and an ornamental bell and whistle.

The 746 did not change during its production run. However, there are two variations to the 746W whistling tender. The common version has a shorter side stripe, while the much more difficult variation has its side stripe running the entire lenght of the tender shell. Both variations have Norfolk and Western printed on the side.

Short Stripe - Shown in the photo above. - The common version tender.
Long Stripe - A very difficult tender variation to locate. 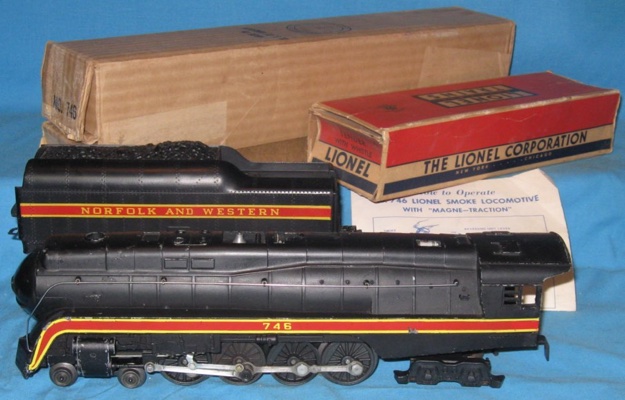