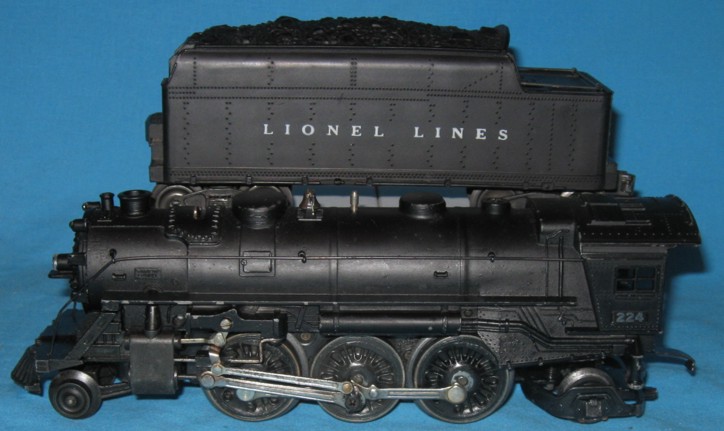 The 224 was introduced in the first year of Lionel's postwar production era, 1945. Its number and boiler casting were carryover items from the prewar era. Practically all of the updates or modifications centered on the internal components.

Features
The 224 steam locomotive has the following standard features: a black-painted, die-cast boiler with a 2-6-2 wheel arrangement, detailed driving wheel hardware, Baldwin disk drive wheels with nickel rims, die-cast trailing truck, three-position E-unit, headlight, wire handrails plus an ornamental bell and a simulated whistle. The number board can be found on a metal plate under the windows on the cab.

The 224 was initially offered with a 2466W tender, but soon changed to the fancier 2466WX which contained additional deck railings. Both tenders contain a whistle.

A quick way to identify a 1945 model versus its 1946 counterpart is to view the cab floor on the back of the steam engine. The 1945 model has a floor which is 'squared-off' along the back edge -- similar to the prewar version. The 1946 model has a more rounded and elaborate cab floor.