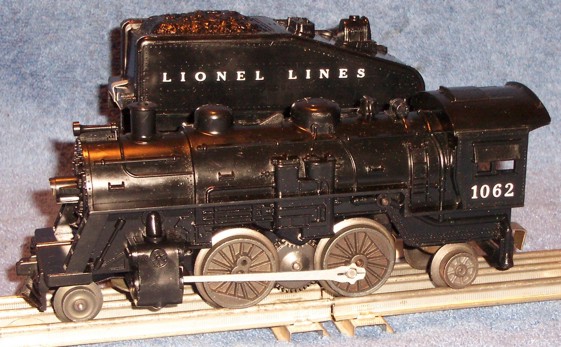 History
The 1062 steam locomotive is frequently referred to as a Scout locomotive. Lionel used the word Scout to denote its entry-level 027 steam locomotives. Generally speaking, Scout engines had a 2-4-2 wheel arrangement and were reserved for beginner or starter sets. These locomotives had few features and could rarely pull more than a three or four car freight train. The 1062 included a slightly more advanced motor assembly when compared to Scout steamers from the prior year and is a fairly good and reliable running locomotive.

The 1062 was introduced in 1963 and is the only postwar Lionel steamer to have multiple wheel arrangements. It was generally produced as a 2-4-2 steamer, but has been known to have come as an 0-4-0 steamer. It was available in numerous catalogued and uncatalogued sets and was a very basic steam locomotive of the time as it had few features. There is minimal collector interest in this steam engine.

Features
The 1062 steam locomotive included the following features: unpainted black plastic boiler white lettering, two-position E-unit, a single metal drive rod on each side plus a headlight and headlight lens. Additionally, the 1062 is known to have come with either or without traction tires.

The 1060 was available with one of five tenders, all being non-whistling tenders. The 1062 was produced with either the 242T or 1060T slope-back tenders, the 1061T or 1062T steamlined tenders or a scarce Southern Pacific lettered tender.

Only Known Variation - All 1062s are unpainted black with white numbers and available with five different tenders.