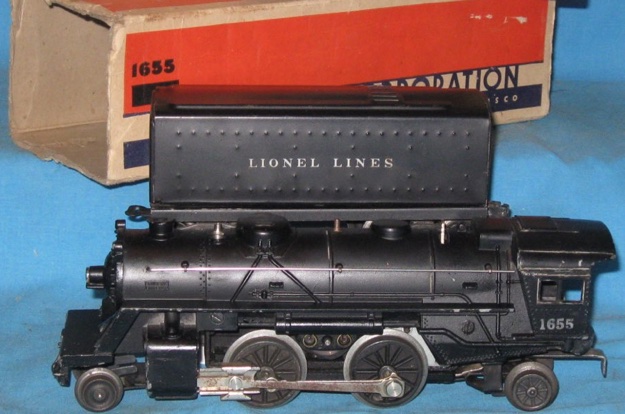 History
The 1655 steam locomotive is almost identical to the 1654 of the mid-1940's. The main difference being the 1655's tender was now updated with magnetic couplers which replaced the coil-type couplers on the earlier steamer. The 2-4-2 wheel arrangements on these steamers was reserved for beginner or starter sets and the locomotive had few features. Generally speaking, the 1654 and 1655 could rarely pull more than a three or four car freight train.

Collectors frequently refer to this locomotive as a Scout engine. Although it shares the same 2-4-2 wheel arrangements as other Scout engines produced in 1948, Lionel did not classify this steamer as a Scout locomotive. Scout trains of 1948 (and future years) used a different type of coupler -- which was not compatible with traditional Lionel trains. Since both the 1654 and 1655 locomotive used the traditional coupler on the rear of the tender, they were not classified nor sold as part of the Scout series.

The 1655 was offered in several Lionel sets as well as being available as a separate sale item. It contained several nice features -- such as a die-cast boiler, illuminated headlight and three-position E-unit -- which were not included on most entry-level steamers produced by Lionel during the 1950s and 1960s. Like many entry-level locomotives produced by Lionel, there is minimal collector and operator interest in this steam engine.

The 1655 was produced with a sheet metal 6654W whistling tender.

Additional Detail, Photos & Box Information
A rare tender version for the 1655 does exist. For a brief period, Lionel produced a 6654T non-whistling tender. The 6654T is assumed to be a production item for export outside of the United States. Although this is only an assumption, it does have merit. Lionel did export trains to other countries and in some instances these countries did not use the same standard household electrical current as used in US homes. Therefore, producing a non-whistling tender was a quick approach in eleminating a potential problem.

Only Known Variation - Shown in the photo above. - All 1655s have black painted die-cast boilers with silver numbers. It was only offered with the 6654W tender.