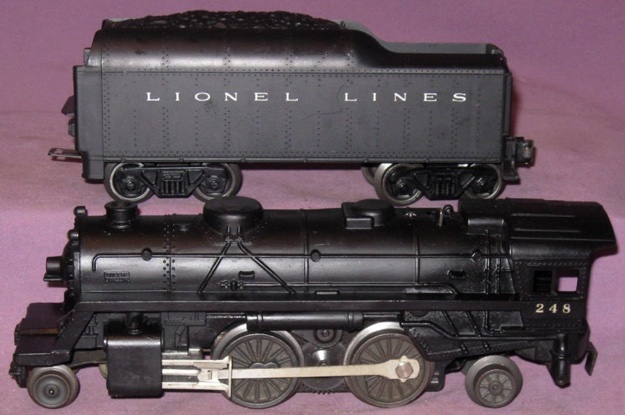 History
The 242 steam locomotive is frequently referred to as a Scout locomotive. Lionel used the word Scout to denote its entry-level 027 steam locomotives. Generally speaking, Scout engines had a 2-4-2 wheel arrangement and were reserved for beginner or starter sets. These locomotives had few features and could rarely pull more than a three or four car freight train.

The 248 was manufactured for only a single year: 1958 and is a fairly difficult locomotive to locate. It was never included in a Lionel catalogued set, but is known to exist is a couple of uncatalogued 600-series sets from 1958. Unlike most Scout locomotive having minimal collector interest, there is a small collector market seeking this steam locomotive solely due to the scarcity of this engine.

This engine did not include a functional headlight, traction tire nor magnetraction. Additionally, the 248 steamer was only sold with a 1130T non-whistling tender.

Only Known Variation - Shown in the photo above. - All 248s are black with white numbers.