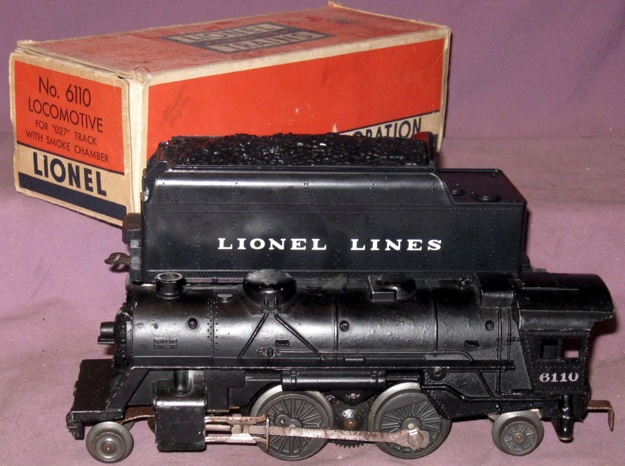 History
The 6110 steam locomotive is frequently referred to as a Scout locomotive. Lionel used the word Scout to denote its entry-level 027 steam locomotives. Generally speaking, Scout engines have a 2-4-2 wheel arrangement and were reserved for beginner or starter sets. These locomotives had few features and could rarely pull more than a three or four car freight train.

The 6110 is one of Lionel's earlier Scout locomotives. This steamer was produced with two features not usually associated with a scout locomotive -- a die-cast boiler and Magnetraction. When compared to the later 200-series scout steamers, the 6110 is a reasonable entry-level steamer in terms of durability and strength. Because of these extra features, there is some limited collector interest in the locomotive.

Features
The 6110 Scout steam locomotive included the following features: die-cast boiler painted black, white lettering, plastic motor with Magnetraction, two position E-unit, a single metal drive rod on each side plus a smoke unit. It did not include an illuminated headlight nor a headlight lens.

One interesting item to note from a design perspective on this steamer is its smoke unit. The boiler front has a small hole near the top. The concept for the hole is that as the steamer traveled along the rails, air was forced into this hole, thus driving smoke out of the smokestack. Although this was a clever and inexpensive way to operate a smoke unit on an entry-level steamer, it proved to be an inefficient and ineffective design.

The only tender sold with the 6110 steamer was the 6001T. The 6001T is a non-whistling tender with magnetic couplers and plastic side bolsters.

Only Known Variation - Shown in the photo above. - All 6110s are black with white numbers and only available with the 6001T tender.