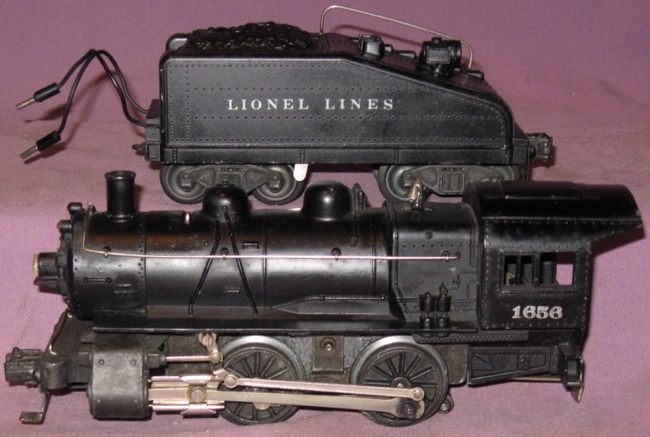 History
The 1656 steam engine was classified by Lionel as a Switcher steam locomotive. It is a small steam engine and was available as a separate sale item or in work train sets. It shares its boiler casting with the 1615, 1625 and 1665 steam switchers.

The 1656 bell-ringing steam switcher was introduced in 1948 after a one-year absence of a steam switchers in the Lionel family. Both the 1665 and the 1656 locomotives are the pinnacle of postwar steam switchers. The combination of high quality, durability and a unique bell-ringing feature continues to make this a highly desirable locomotive. Since the locomotive is designed to haul only a few cars, it will look great working in any freight yard.

A slope-back tender was usually the 6403B, but occassionally a 2403B tender is found with this locomotive. Standard features on either tender include metal staple-end trucks with an operating coupler and a functional bell located inside the tender shell. There is an on/off switch located underneath the tender which is used to operate the bell. Also included on the tender are two wires protruding from the front. These wires have a banana plug on the end and connect to two terminals inside the switchers cab.

Only Known Variation - Shown in the photo above. - All 1656s are black with a slope-back tender.