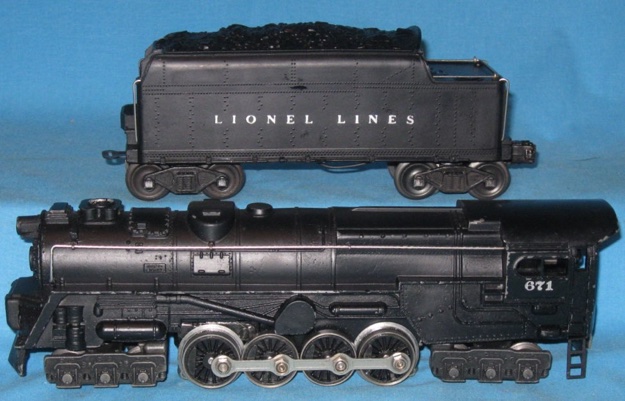 History
The 671 steam engine is Lionel's representation of a turbine locomotive. The 6-8-6 wheel arrangement supported Lionel's advertising claim of 'it's an impressive 20-wheel locomotive!' The prototype was produced for and used by the Pennsylvania Railroad. Due to inefficient fuel consumption, the S-2 was a commercial failure and a second locomotive was never manufactured.

For Lionel, the success story of the turbine locomotive was different. The turbines were a marketing victory. The first turbine was introduced in 1946 and the final one rolled off the assembly line in 1955. Between those years, Lionel produced thousands of turbines. Other examples of postwar Lionel turbines include 681, 682 and 2020, all of which remain popular with collectors and operators. Note that a 671 is the same as a 2020 except the 671 was sold with O gauge track and the 2020 was sold with 027 track.

The 671 (along with its 027 gauge counterpart the 2020) was the first turbine introduced by Lionel. Originally introduced in 1946, it remained in the line until 1949. It also made a brief appearance in 1952, but was finally discontinued after a single year of production. Although none of the 671 turbines have Magnetraction, the sheer weight and reliability of the turbine continues to make it an excellent locomotive for pulling long freight trains.

Features
The 671 turbine locomotive remained in the Lionel family for five production years. However, during its run there were four different versions of that engine. The following is a summary of each:

Additional Detail, Photos & Box Information
The length of the turbine without the tender is approximately 10 3/4" long (front to back). Since the 671 was available with different tenders, its overall length depends upon the specific tender provided with the turbine.

Smoke Bulb - The smoke bulb version of the 671 is hard to locate as it was produced for only a single year.
Electronic Control - The Electronic Control version is hard to locate. Even though production lasted for several years, few were actually made.
Regular Production - Shown in the photo above. -Regular production 671 turbines are the most common of all 671 locomotives.
671 RR - The version without the 'RR' stamped on the cab is in the photo above. Either of the 671RR locomotives are somewhat difficult to locate.