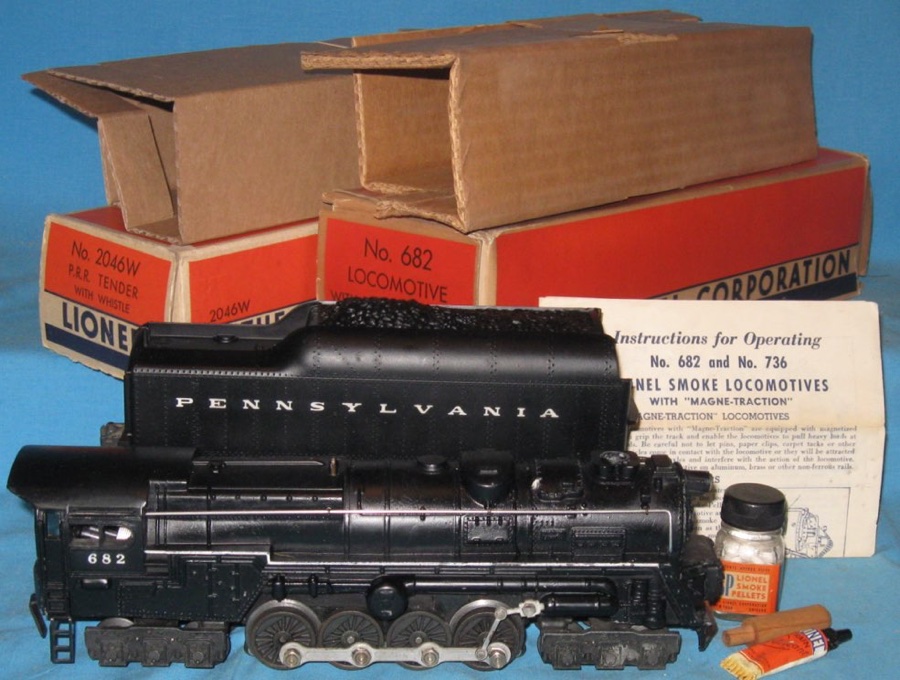 History
The 682 steam engine is Lionel's representation of a turbine locomotive. The 6-8-6 wheel arrangement supported Lionel's advertising claim of 'it's an impressive 20-wheel locomotive!' The prototype was produced for and used by the Pennsylvania Railroad. Due to inefficient fuel consumption, the S-2 was a commercial failure and a second locomotive was never manufactured.

For Lionel, the success story of the turbine locomotive was different. The turbines were a marketing victory. The first turbine was introduced in 1946 (numbered 671) and the 682 was the final one to roll off the assembly line in 1955. Between those years, Lionel produced thousands of turbines. Other examples of postwar Lionel turbines include 671, 681 and 2020, all of which remain popular with collectors and operators.

The 682 is basically a continuation of the 681, but with the addition of two items:

Lionel included these two additional items in an attempt to dress-up the rather plain, all-black 681 turbine. These changes were a success as the 682 has become one of the most desired turbine produced in the postwar era. Like all other postwar turbines, it's a durable engine and has pulling power comparable to some of the best locomotives produced by Lionel.

Features
The 682 turbine locomotive had a brief two-year production run. Standard features include: black painted die-cast shell with white numbers and a white side stripe, '6200' on the keystone, a single drive rod on each side with a valve gear linkage rod, Magnetraction, three-position E-unit plus a headlight and smoke. The pilot and trailing trucks are always die-cast.

The locomotive was always sold with a 2046 whistling tender with Pennsylvania markings.

Only Known Version - Shown in the photo above. - There is only one reported version of the 682 S-2 turbine locomotive.