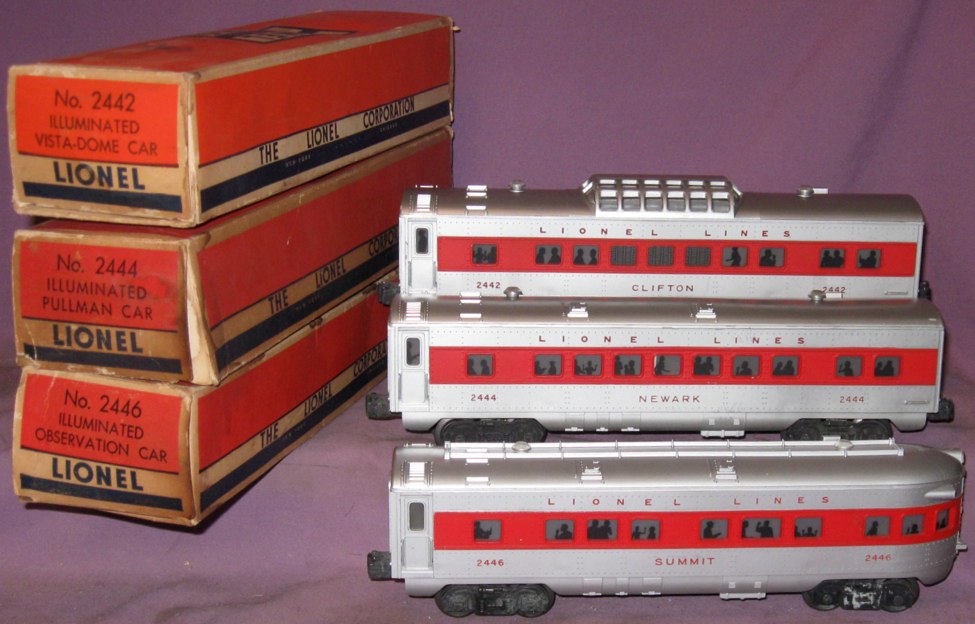 History
The 2442 Clifton vista-dome, 2444 Newark Pullman and 2446 Summit Observation passenger cars are part of a four car set offered by Lionel in only one year, 1956. Lionel's sole outfit for these passenger cars was set # 1562W, which included a pair of Clifton vista-domes, a Newark pullman plus the Summit observation, all pulled by the attractive 2328 Burlington Geep diesel. It is interesting to note this set is almost identical to the 2432, 2434 and 2436 passenger cars, but with a red stripe added to the side of each car.

As noted above, these cars were only offered in one set plus were available as a separate sale item. Collectors frequently refer to these passenger cars as the Red Stripe set. Interestingly, Lionel also produced a 2445 Elizabeth pullman car in 1956, but was only available as a separate sale item and never included in the set. Many collectors and operators try to assemble the entire five car set, but this is difficult to do as the set is hard-to-find and the 2445 add on Elizabeth car is rare!

Features
Standard features on the 2442, 2444 and 2446 passenger cars include: painted silver bodies with red lettering, silhouetted window strips, die-cast passenger car trucks plus interior illumination. The observation car has a single operating coupler while all of the remaining passenger cars have an operating coulper at each end.

Only Known Version - Shown in the photo above - All Red Stripe cars are painted silver with red lettering and a red side stripe.