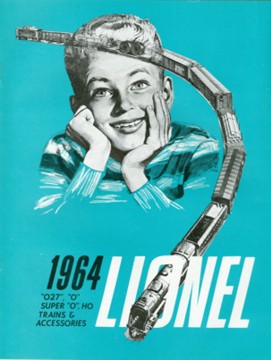 At 24 pages, the 1964 catalogue was almost 60% smaller than the 56-page 1963 catalogue -- and over 75% smaller than the 100-page 1962 catalogue. These are astonishing decreases for only a two-year period. It does, however, provide some insight into both the problems within Lionel as a company and the overall declining interest in trains during the early 1960's. Needless to say, the 1964 product line was only a fraction of prior year offerings.

Surprisingly, there was some interesting news for 1964. Although each of these received no fanfair in the catalogue, 1964 did mark the re-introduction of the 773 semi-scale Hudson as well as O gauge track. The last time O gauge track appeared in a Lionel catalogue was 1957.